Under the exposure conditions of this test, test material O24™ Pain Neutralizer did not induce delayed contact sensitization (allergic contact dermatitis) in any subject completing the study.

One hundred twenty-seven subjects were enrolled to participate in this study. One hundred eight subjects completed the study. Nineteen subjects discontinued participation in the study for reasons unrelated to the test material.

No adverse events occurred over the course of the study.

One hundred eight subjects completed the study. Ethnicity information was obtained from each subject’s eligibility and health questionnaire.

At Visit 1, prospective subjects completed an eligibility and health questionnaire and read and signed a confidentiality agreement and an informed consent agreement. Qualified subjects were prepared for patch application by having the test sites wiped with alcohol and air-dried. For the induction period, subjects were semi-occlusively patched with the Sponsor’s test material nine times at approximately 48 to 72-hour intervals. Subjects were informed that the test material may cause a strong warming sensation for a few hours after application. Subjects were instructed to remove and discard the induction patches 48 hours after application or two hours prior to a study visit. Reactions at the application sites were graded approximately 48 to 72 hours after each application by a trained clinician.

The following scoring scale and symbols were used to grade the test sites:

Erythema Scale: This scale was used only for grading the degree of erythema (redness). A score on this scale was assigned following every application of a test material.

Designation for Elevated Responses: Edema, papules, vesicles, and bullae, if present, were graded as independent responses.

A frequency table of the induction and challenge scores was generated for the test material by grading time point. Data Interpretation Persisting reactions with edema, vesicles, papules, or spreading that develop in the induction phase and/or at both challenge sites may be indicative of allergic contact dermatitis. Allergic responses normally do not improve markedly at 72-96 hours. Edema or infiltration that persists or increases in intensity is indicative of allergic contact dermatitis. Other indicators are “flares” at former application sites or responses that develop between induction and challenge.

Exceptions to the typical patterns are known to occur. For example, a subject may show symptoms of allergic contact sensitivity early in the induction period to one or more of the test materials. This usually suggests that the subject had a pre-exposure to a component in the test material or a material having similar chemical cross-reactivity to the test material. Data for such subjects will not be included in the final statistical analysis.

All original records (including the study protocol, observation records, medical histories, informed consent agreements, attrition form, and any other records or forms used in this study) and a copy of the final report will be retained on file in the Stephens & Associates archives for two years from the date of completion of the study. When the archive time has expired, the study files will be sent to the Sponsor at the Sponsor’s expense or destroyed in accordance with the Sponsor’s preference.

Table 1 presents the score frequencies observed at each visit during induction and challenge.

Under the exposure conditions of this test, test material O24™ Pain Neutralizer did not induce delayed contact sensitization (allergic contact dermatitis) in any subject completing the study.

All data and supporting documentation for this study have been audited by the Stephens & Associates, Inc., Quality Assurance Department and found to be accurate, complete, and in compliance with the requirements of the protocol and Stephens & Associates’ Standard Operating Procedures. This report has been reviewed and accurately reflects all aspects of the conduct of the study.

All clinical research studies that are performed by Stephens & Associates are in accordance with federal regulations and Good Clinical Practice guidelines. 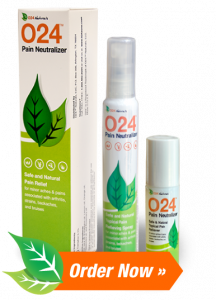